The last half of the 20th century was a time of wider inclusion and expansion of adult education, as a growing number of people of all ages and backgrounds wished to have university-level educational opportunities.

The 1980s saw a major (and much-needed) expansion of Rewley House: the gardens behind the terraced houses along the south side of Wellington Square, and the former schoolyard of the St Anne's Rewley School were the sites of new construction. Many of the features which are familiar to today's students were added during this time: our attractive sunken courtyard garden, the Geoffrey Thomas Lecture Theatre, the Common Room, the Continuing Education Library, the Mawby Pavilion, the Sadler Room and our Dining and Acland rooms.

'Plans for major improvements to Oxford University’s Department for External Studies have been unveiled. The W K Kellogg Foundation in America has given £3m to the Department, which is in Wellington Square, Oxford, and has 7500 adult students on parttime courses.

'The money will be spent on: a new 125-seat lecture theatre; new accommodation so that most of the 80 students living-in will have single rooms; a new library and administration block; a lift for disabled students and a coffee lounge. Some of the work will be putting up new buildings on the Department’s Wellington Square site, while the rest will involve internal reconstruction of the existing buildings.

'It is the second time the Foundation, which is an offshoot of the breakfast cereal manufacturer, has helped the Department, which has branches in Buckinghamshire and Berkshire as well as Oxfordshire. in 1963 they gave £32,000 to convert four houses in Wellington Square into a residential block. The University’s Vice Chancellor, Mr Geoffrey Warnock, described the gift, at a reception to mark new of the announcement, as "enormously munificent". New projects in the University were now rare because of the difficult financial climate, he said. "It is vitally important that we should not allow the University to become frozen and stagnate."

'The Director of the Department, Mr Dick Smethurst, said, "We very much hope that this will help the University to improve its service as a whole. The role of a great international university goes beyond teaching 18 to 25 year olds. A university is a resource which must be made available much more widely."

'The building work is expected to be finished in about four years. Department has not decided whether to move out while work progresses.'

Professor Angus Hawkins remarked that the development of Rewley House in the 1980s was, ‘…a wonderful bit of architectural design. It was a very restricted site in terms of available space – but when you go down into the courtyard, you don’t get a sense of it being closed in or claustrophobic. It’s a nice, open space.’

Top photo: the new building works went into the back gardens of the former terraced houses which the Department had converted to student accommodation in the 1960s. Pictured here is the future site of our main entrance and reception. The truck in the foreground is parked over land that will soon be excavated for our Lecture Theatre, with Rewley House reception, the Sadler Room, and academic offices above. The man in the white hard hat, to the middle right of the picture, is standing where the Rewley House Continuing Education Library will be built, and the Mawby Room above it.

The birth of a college

In May 1990, Rewley House became a 'society of entitlement'. This meant that Rewley House (as an entity in itself, co-existing with the Department) was incorporated into the Collegiate University. Rewley House was able to matriculate students, and the academic staff of the Department were able to form a 'Society of Fellows'. The first cohort of twenty five students, pursuing a two year, part-time course leading to an MSc in Educational Studies, were matriculated in October of 1992. 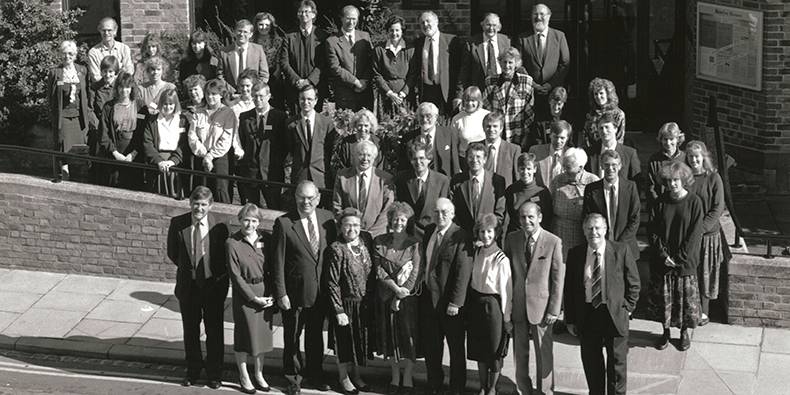 This fledgeling collegiate entity was renamed Kellogg College in October of 1994, in recognition of benefactions from the WF Kellogg Foundation in the United States.

Kellogg College moved from Rewley House to its current location on the Banbury Road in 2006; Kellogg is (and always was) a completely separate administrative entity from the Department - albeit one with strong ties to us. Many of the Department's academic staff are Fellows of Kellogg College.