The account below, excerpted from the 'Rewley House Papers', February 1931, tells of summer school life in 1930. It was recorded just after the acquisition of Rewley House by a student who attended regularly during the early years of the 20th century.

A nostalgic visit to Oxford

The anonymous author, returning to Oxford in 1930 after some years away, records impressions of his (or her) experience of the Department's summer schools – having last attended in 1913.

Much had changed between 1913 and 1930. In 1927, the Department had acquired Rewley House, giving Continuing Education a permanent base in Oxford. Prior to this, all our summer teaching was done in numerous of Oxford's colleges. Summer students had a decades-old tradition of staying in lodging houses around Wellington Square where, after the day's classes were over, discussion would rage far into the night. The purchase of Rewley House, also on Wellington Square, was an apt one.

The scene described below is an early view of our Oxford University Summer School for Adults (OUSSA), one of our most popular summer schools. The common room he mentions is pictured above, as it appeard in 1927.

Current and past students of OUSSA may be surprised at just how little has changed in the intervening years, as the author records the flavour of summer schools in the early decades of the 20th century, impressions of Oxford... and the importance of that most dreaded of things, the summer school essay!

'That Essay' - by a very old student

'...evening found me, as the light was gently drawing in, once more in Wellington Square, gazing like a pilgrim at a shrine at No. 41, the original of Summer School lodging-houses. There I stood, bemused, until 'noises off' pierced my ear and called me to myself. It was the sound of many voices raised in song, untuneful but jolly. I followed my ear until it led me to a big flat-faced house in the corner of the Square, with a resplendent door of many colours.

'Still following the sound as the children followed the Pied Piper, I passed through the entrance, up the stone steps, to a door inscribed 'Common Room' from behind which the singing came. I turned the knob and went in. And there, I saw at once, was a Summer School in the full bloom of its social revels. Led by a Yorkshireman ('thy speech bewrayeth thee'), they were singing in unison.

'They would, I reflected as I gazed around, be all strangers to me after seventeen years. Gone would be the old familiar faces. Then I heard a shout of greeting and there, waving in recognition - surely it could not be, yet so it was – were Jack Elkin, Ted Hobson and Peter Price, and still more surprising and delightful, Levena Saltonstall. The gap of years was spanned.

'But let me get back to the song which lured me in. I knew the tune. It was associated in my memory with lines which insisted on reiterating that 'My bonnie lies over the ocean', but these words I was trying to catch were certainly different. Seeing my puzzlement, someone thrust a typewritten sheet into my hands with verses on it entitled 'My Essay', at the same time telling me that the words had been completely composed by students. I came in, I think, on the third verse:

'As I joined the song some sympathetic chord stirred within me, but died down as I became submerged in the subsequent proceedings - a homemade play (and very good), a recitation (more Yorkshire), a fox-trot and a final chorus. Soon after ten-thirty we trooped out, shedding bits of our party at various doors in St John Street. The remainder made for Balliol, stopping on the way for a nightcap at the street coffee stall, an innovation since my day. Then goodbyes, as the College gate opened to swallow my friends old and new at one gulp, leaving me in the deserted street to wander 'lonely as a cloud' round Oxford in the moonlight to stand again in well-remembered places.

As eleven o'clock chimed from a hundred bells all out of step, some mellow, some harsh, some striking with slow measured beat...

'As eleven o'clock chimed from a hundred bells all out of step, some mellow, some harsh, some striking with slow measured beat, some hurrying as if eager to get the long business over, I found myself in Radcliffe Square, the fine core of Oxford's beauty. A ripe August moon poured its rich light into the Square. Solidly planted in the centre stood the black rotund mass of the Camera; over its shoulder the spire of St Mary's threw its tapering shadow across the cobbles like a huge finger pointing to my feet, and to the left the towers of All Souls floated, glowing dimly in that gorgeous night -

In such a night
Did Thisbe fearfully o'ertrip the dew...

'The place was enchanted. Yet I couldn't give myself to it, for those doggerel verses sung in the Common Room were running round my head, and something in the bottom layer of my mind was struggling to the surface... at last it popped out like a chicken from its shell. That essay! Why did the students sing about it with such hearty ill-will? Had I used to feel like that about written work, and do most students regard it as an unpleasant task imposed for reasons obscure to all except those initiated in the mystery, as an obligation insisted upon by a highbrow Board of Education or University Committee...?

'As I meandered back to my lodging, I concluded that many of us used to look at it like that. The essay was a bugbear. I went on to consider the educational methods ... in the tutorial class in order to discover the function of the essay.

Out of a sincere discussion in which the minds of the students are closely engaged in an effort to find truth and not just to score debating points, something emerges of more value than the view of any single individual - a kind of highest common measure of the knowledge and wisdom of all.

'First comes the tutor's part. His task is to blaze a trail through the subject for the students to follow, and to present to them a coherent plan of the subject-matter, filling it in bit by bit, offering for their consideration his own interpretation of debatable questions, and referring them to the authorities. Next is the discussion. Here the diversity of outlook, experience and temperament of student should have free play so that light from all angles may be thrown on the many facets of truth. And here I stopped to wonder if I'd ever realised how potent in adult education a good discussion can be. Out of a sincere discussion in which the minds of the students are closely engaged in an effort to find truth and not just to score debating points, something emerges of more value than the view of any single individual - a kind of highest common measure of the knowledge and wisdom of all.

'Then we go to the books. The student reads to enlarge his knowledge of the subject, to supplement the tutor's exposition, and to acquaint himself with what the accepted authorities, with their different ways of approach and conflict of new, have to say...

'At this point you exclaim impatiently, "And that's the end, and so to bed." No; if we stop here we shall miss the consummation of all that has gone before in this educational method and fail to reap the full fruit of our previous work. We have still to think out our own interpretation and form our own judgement on the material we have gathered from the lecture, the discussion, and our reading.

'We don't attend class merely to accumulate facts: these we can get from the encyclopaedias and reference books. We join with others in a fraternity of study such as a class provides, to submit ourselves to an education process through which we can learn how to interpret and co-ordinate facts and figures, how to distinguish the significant from the inessential, and now to form critical judgements and do our own thinking. Having listened to the tutor, argued with him and our fellow-students in the discussion, and read the books, it now remains for us to tackle the essay...

'Self expression is the acid test, for having, as you imagined, cleared your mind and shaped your conclusions on the whole matter, often enough it is only when it comes to making the thing clear on paper to someone else that you will discover how foggy about it you still are. This act of self-expression is the final step and rounds off the educational process.

'This is how it appeared to me on that rare August night in Oxford, as I reviewed my student days and asked myself what I got out of essay-writing. It is, of course, a personal view, and what feeds one student may poison another, and so, while I believe that my particular experience may have some general application, I do not wish to dogmatise. Besides, it's easy to champion the essay when you've no more to write.

'There, Mr Tutor, is my essay. You will hand it back to me with your comments written on it. These I shall not be able to read, for, like that of most tutors, your handwriting will be illegible. But I can guess that your remarks will run something like this: "Your essay is too long-winded. It takes too long to get to the point, and there is too much moonshine in it. You can do better than this." Let us leave it at that.' 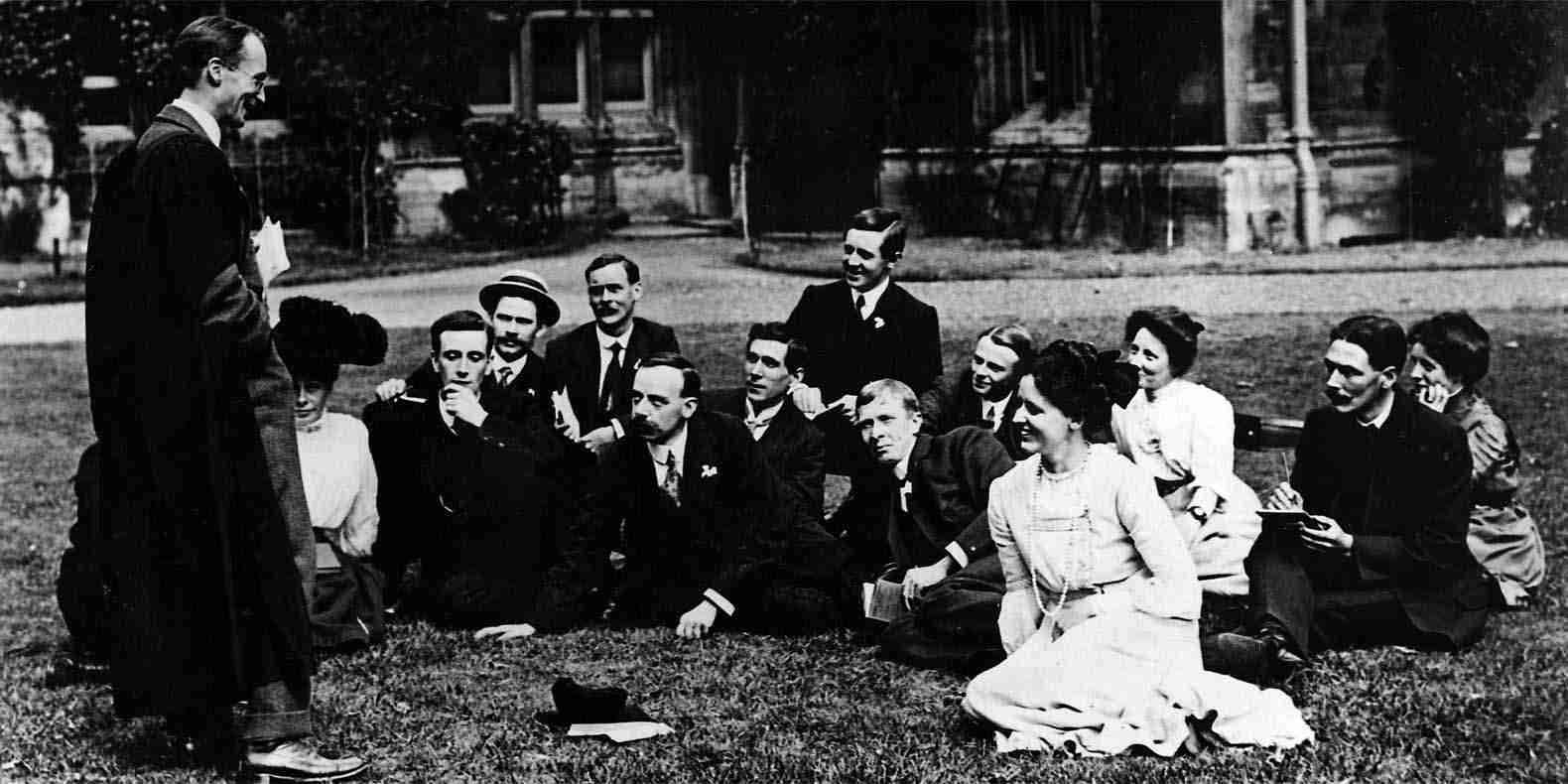 Pictured above, students from the 1911 Summer Meeting. Our anonymous author, who was a regular attendee until 1913, may be pictured here.

Most of the other content in these 'History of the Department' pages is to be found in the book 'Dons and Workers: Oxford and Adult Education Since 1850', by Dr Lawrence Goldman, Fellow and Tutor in Modern History at St Peter's College, Oxford, and a former member of the Department for Continuing Education.