Britain in 2019 – in common with many countries around the world – faces major social, political and economic challenges. Citizens are confronted with climate crisis; communities are more divided than in living memory, with many feeling excluded from today’s politics; and Artificial Intelligence threatens to disrupt jobs and permanently alter the nature of work.

Despite an obvious need for education to be accessible throughout a person’s life, funding in the UK for adult learning and apprenticeships has fallen by 45% in real terms since 2009-10, cutting adult participation in education dramatically.

The new report calls for: 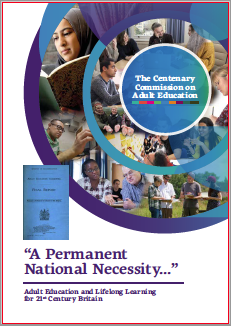 ‘There is a national consensus in favour of adult education and lifelong learning. We need the next government to step up to the challenge, and deliver what is, in the words of the 1919 Report and today's Report, "A Permanent National Necessity". In meetings across the country our Commission found a huge appetite for adult education and lifelong learning - we saw evidence of communities being brought together through imaginative educational initiatives; new groups being formed to analyse and discuss the issues of the day, including the climate crisis; and a desire to understand and prepare for the changing world of work, including amongst those in the 'gig economy' for whom provision at present is scant. Our Commission's recommendations would address all these needs.'

‘There is a national consensus in favour of adult education and lifelong learning. We need the next government to step up to the challenge, and deliver what is, in the words of the 1919 Report and today's Report, "A Permanent National Necessity".' – Dame Helen Ghosh, Master of Balliol College, Oxford

A hundred years ago, the Ministry of Reconstruction, established under Lloyd George’s wartime coalition government, was to oversee rebuilding 'the national life on a better and more durable foundation'. Its adult education committee was chaired by A.L. Smith, Master of Balliol College, Oxford.

The 1919 Report on Adult Education provided a template wherein adult education was seen as a cornerstone in the building of a democratic and tolerant civil society.

Lifelong learning flourished through most of the 20th century. Committed to enriching the communities where people live and work, access to education at all times of life constituted a vital, if often unacknowledged, part of the social fabric.

‘The twentieth century made some great strides in adult education, including the creation of the Open University – but the twenty-first century has done less well’, said John Holford, Robert Peers Professor of Adult Education at the University of Nottingham.

With the exception of Oxford and Cambridge, most universities have now closed their extra-mural departments, and underfunding of local authorities has resulted in the disappearance of many of the adult education classes they used to run.

‘Very often local authorities have hived it off into some semi-non-profit organisation, so the idea of local authorities having their own provision has largely disappeared,’ says Professor Holford. ‘It varies a great deal by the affluence of the area, so that has resulted in a topsy-turvy approach, where the richest areas are best endowed with all these services and the poorest areas that probably need them most are least well-endowed.’ Further education, too, has ‘taken a battering’.

‘They believed in 1919 that properly funded and universally accessible lifelong learning was essential if the nation was to rebuild itself. They were worried about mechanisation at work, meeting the growing demands of women as voters and workers, maintaining world peace, or simply equipping people to be active, engaged citizens. Today’s challenges are just as daunting:  climate change, AI and its impact on jobs, deep social inequality, divided communities and a growing mental health crisis. Finding solutions needs to start with a clear, well-resourced National Strategy for Adult Learning, in which central and local government, business, voluntary organisations and communities all play their part.’

An ‘Adult Education 100’ campaign is leading a range of activities to mark the centenary of the 1919 Report, one of which has been the formation of the Centenary Commission on Adult Education. The Commission’s remit was the same as for the 1919 committee: 'To consider the provision for, and possibilities of, Adult Education in Great Britain, and to make recommendations.'

The Centenary Commission’s report aims to stimulate a national debate, and new thinking about adult educational policy. Patrons of Adult Education 100 include Baroness Joan Bakewell, President of Birkbeck University of London, and Mary Beard, Professor of Classics, University of Cambridge.

Vigorous endorsements of the Report’s recommendations have been received from all quarters – supporting the view that lifelong learning is a matter of national importance.

Welcoming the Report, the Chief Economist of the Bank of England Andy Haldane said:

'This Report contains powerful and compelling recommendations for transforming and embedding adult education. It is an ambitious blueprint, but circumstances today and especially tomorrow call for no less. For three centuries, the UK’s education system has had a singular – and very successful – focus: developing cognitive skills in the young. That model is not fit for tomorrow’s purpose. The education system of tomorrow needs to span the generational spectrum - young to old - and the skills spectrum - cognitive to vocational to interpersonal. The economic benefits of doing so are crystal clear. The social and civic benefits are greater still. Social problems of disadvantage, disconnection and division loom large - adult education is one means of tackling those three d’s at source.'

‘The education system of tomorrow needs to span the generational spectrum - young to old… The economic benefits of doing so are crystal clear. The social and civic benefits are greater still.’ - Andy Haldane, Chief Economist of the Bank of England

Sir Vince Cable said 'I warmly welcome the Report of the Centenary Commission on Adult Education. Adult education has never been more important and yet it is in decline and is poorly supported by Government. There is great merit in the idea of equipping adults with a learning account which can be used for adult studies as people progress through life. Today’s skills and qualifications will often become redundant and we need a mechanism, through adult education, to help people adapt.'

Author Jojo Moyes said 'Levels of adult literacy are shameful in this country and that's partially because of the threat to libraries, the cuts and slashes in funding. I urge government to respond positively to this call for investment in adult education and lifelong learning.'

President-elect of the Confederation of British Industry and Commission member Lord Bilimoria said: 'I commend this Report for showing the way, and I call on the next government to implement its proposals.'